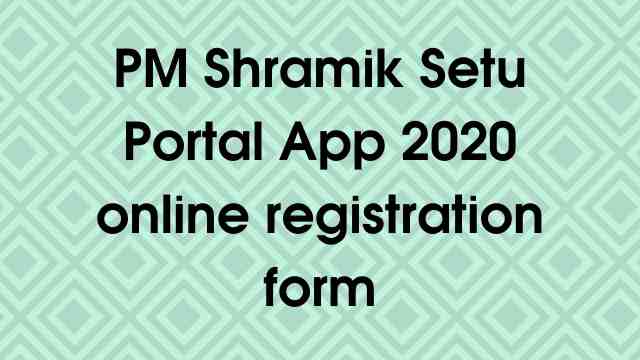 To eliminate the problem of migrant laborers during the Corona period, the Prime Minister of the country has now announced the launch of the Shramik Sethu portal and mobile app. Through this portal, the laborer will get easy work in any state of the country.

It is to be known that due to the lockdown in Corona, these migrant laborers were the most unemployed. Neither he had money to eat, nor to return to his state/village. But now this situation of these does not continue, that’s why Modi Ji Shramik Setu Portal And App starting By visiting this portal or app, a person will only have to register himself and he will get employment opportunities. If you also want to register yourself on this portal, then stay on this article till the end.

Both skilled and unskilled laborers will be able to register themselves on the Shramik setu portal. Because its app will also be launched, in which way it will be easy to register. Apart from this, if the laborer goes to any other state after registration, then there will be no need to register again, instead, he will only have to update his location, after which the laborer will get work easily in that state. All the migrant laborers who register themselves on this will be given employment on any scheme run by the central government.

As we know, at the time of Corona, a large number of workers had to migrate to their respective states. Now if they are not provided employment opportunities there, they will be forced to flee their states again.

This is why the Modi government has announced the launch of the Shramik Setu portal and the Shramik Setu app. So that laborers may be employed in any part of the country. Through the portal, the government will also try to improve the economic condition of the workers.

There is a need to wait a little longer for Prime Minister Narendra Modi to register on the Shram Setu portal. Because Modi has just announced to launch this portal. It has not been launched at the ground level yet. But it is being told that the government will launch this portal and app by July 2020. It will be possible to register after the portal is launched.

What is Shramik Setu Portal?

It is an employment portal through which migrant laborers will be given employment.

How to register on PM Shramik Setu Portal?

Registration on Shramik Setu portal can be done through online.

What is the most important thing about registration on PM Shramik Setu portal?

If a person moves to another state after registering on the portal, he will get employment there too.

Will workers get any other benefits through Shramik Setu Portal?

Yes, it is being said that after registering on the portal, applicants will also be given the benefit of the pension schemes and insurance schemes.